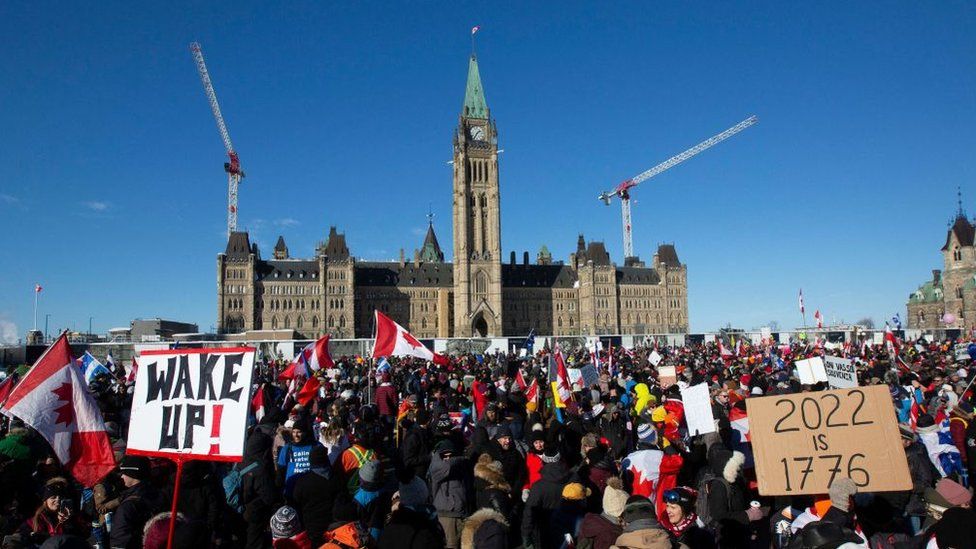 As thousands of truckers impacted by the Trudeau government’s new border vaccine mandates protest across the country, it raises important questions about economic tools of repression.

The right to publicly protest unfair and wrongheaded government policies is one of the cornerstones of any democratic system. Attempts to ban protests are usually the domain of repressive governments like that of China, Iran and Nigeria, although countries in the West – including many in Europe – are starting to crack down on free assembly, often using the pandemic as a justification.

In Canada, we’re not there yet, despite 2021’s widespread bans across the country at protests near hospitals and schools. As a country, we still have a strong consensus that people gathering peacefully to express the need for change is important, and has been a catalyst for some of the biggest and most necessary shifts towards a better society, like the many protests that led full human rights for women.

Of course, the pandemic has been one of the most polarizing forces in recent memory, and protests over vaccine mandates and other restrictions have divided the nation. Now, as thousands of truckers gather in Ottawa and other Canadian cities to demand a repeal of the January 15th vaccine requirement for entry into Canada, it’s becoming clear that our tolerance of freedom of speech has limits.

As thousands of truckers impacted by the Trudeau government’s new border vaccine mandates protest across the country, it raises important questions about economic tools of repression.

The issues leading to the Freedom Convoy protests seem clear cut – after more than two years, the COVID-19 pandemic is still causing a massive impact to the lives of Canadians, and the Prime Minister has ordered new restrictions that remove the exemption that non-or-partially vaccinated truck drivers previously had to Canada’s mandatory 14-day quarantine upon entry.

However, from the point of view of the protesting truckers, these restrictions will not only impoverish thousands of workers and be completely ineffective at stopping the spread of a prolific variant already testing at record numbers across the country, but vaccine requirements will also devastate our already weakened supply chains, impacting all Canadians.

Out of our approximately 160,000 cross-border truckers, 15% do not have two approved vaccinations, sidelining 24,000 drivers at a time when Canada is already experiencing a shortage of more than 18,000 workers, and unvaccinated American truckers are banned from entry altogether. This means more supply delays, emptier store shelves and much higher prices added to the 7% inflation in food prices Canadian families are already expected to endure in 2022.

Another question is also being asked by the Freedom Convoy: if the government’s sole focus is to stop the spread of COVID into Canada, why are other groups still exempt from vaccination requirements – like foreign food and agricultural workers? Is it reasonable to apply this rule to truck drivers who simply move boxes of products while exempting those picking and processing our food, considering that these facilities have been a major source of Canadian cluster outbreaks?

This is not as simple of an issue as it’s presented by the media, and it doesn’t just affect one sector. More than 2/3rds of our cross-border commerce with our largest trading partner takes place over land and exacerbating our transportation worker shortage will impact countless other businesses apart from food. While truckers may be the most visible signs of opposition to these policies, they are far from alone.

The Canadian Chamber of Commerce has issued a strong request to the Trudeau government to delay the enforcement of the vaccine requirement, stating that supply chains are under “severe pressure”. Similarly, the Canadian Manufacturing Coalition warned of “empty shelves” due to supply chain bottlenecks. According to a director at Dalhousie University, the busy November to March season is the worst possible timing for new trucker restrictions, especially for the $21 billion in food we buy from the US each year.

It’s even likely that more Canadians support the mission of the Freedom Convoy than they realize. It’s a strong statement about the media’s ability to spin situations that only 28% of Canadians report being in favor of the protest – yet just 36% overall agree that cross-border truckers should require two vaccinations, the crux of the issue being protested.

Whether you agree or disagree with their position, the cross-border vaccine mandate is exactly the kind of situation that our Charter of Rights and Freedoms was meant to protect – a major policy issue with reverberating economic and social effects on the country. And just as labor movements have always historically fundraised to support strikers and protestors, the Freedom Convoy saw a groundswell of Canadians willing to step up and support them in their mission.

Until, that is, crowdfunding platform GoFundMe made the executive decision on January 25th to restrict the nearly $5 million dollars that Canadians had donated, many in $50 increments, to provide food, shelter and fuel to the Freedom Convoy raising awareness of these issues. Citing the platform’s policies on transparency about how the funds would be used, GoFundMe held the donations for days, until finally agreeing to start partially releasing funds to the organizers on a schedule.

But this action against the Freedom Convoy fundraiser wasn’t quite so simple, because it likely wasn’t just a question of GoFundMe policies designed to make sure funds were properly being directed to the stated cause. According to some analysts, the funding freeze may have been motivated by other considerations – like GoFundMe’s liability for “financing terrorism” or criminal activity if any convoy members had been accused of acts of violence or property destruction.

This means a single bad actor, even loosely associated with a protest, could impair the entire legitimate movement’s receipt of fundraised money – a risk that many public issue groups likely aren’t aware of, but should be highly concerned about. In the US, GoFundMe shut down all fundraising for protests associated with a party 50% of the country supports, despite plenty of examples of violence associated with protests held by the other side of the country’s political divide.

Whether GoFundMe will fall afoul of anti-terrorism financing laws if a fundraiser is associated with a violent act is, of course, up to governments to decide. When fundraising platform like GoFundMe can be leveraged as tools of economic censorship against unpopular movements, it’s time for alternatives that are outside of the control of government forces – and in my opinion, Bitcoin is the best solution.

In particular, Nigeria is a striking demonstration of how Bitcoin, decentralized and secure, can help support movements against unfair government policies and state-sanctioned violence. Launched in 2017, Nigeria’s #EndSARS movement – created to stop rampant policy brutality against citizens by the Special Anti-Robbery Squad (SARS) – led to years of the largest protests in Nigerian history, and an equally massive government campaign to oppress the movement.

The Nigerian government froze the bank accounts of people accused of supporting #EndSARS, and sometimes their families. It instituted widespread prohibitions on the receipt of foreign remittances, funds that millions of Nigerians rely on, and generate more wealth for the country than its oil and gas industry. But despite these policies, the #EndSARS movement thrived – because Nigeria found an alternative in Bitcoin, and quickly leapt to the 6th fastest crypto adoption rate in the world.

While I’m glad that GoFundMe is starting to release money to the Freedom Convoy truckers who are taking a stand against a policy with the potential to negatively impact all Canadians, the platform’s restrictions – and the potential for a single accusation to deprive the movement of all funds raised, makes me concerned about the future of protest organization in Canada.

As seen in Nigeria and many other countries around the world, like Afghanistan, economic censorship is just as repressive as threats of jail or state violence, and in order to ensure that people retain the rights to protest unfair treatment, only a fundraising solution outside of government control is truly free.